Home » Blog » The future of RISC-V in China is bright

The future of RISC-V in China is bright 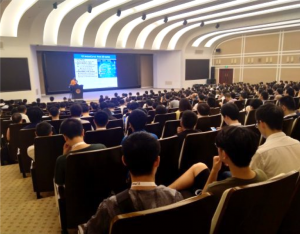 In May 2017 I attended the first RISC-V Workshop in China at Shanghai Jiaotong University.  Just over a year later, on the 30th June I attended the RISC-V Day at Shanghai Fudan University. This comes only a month after Andes and SiFive (both, incidentally, customers for UltraSoC’s RISC-V processor trace solution) held a successful joint event here in Shanghai.

A lot appears to be happening in RISC-V in China and here are a few observations I would like to share.

What has changed in the past 12 months?

Significantly, attendee numbers have doubled year-on-year. From 150 at last year’s Workshop, to over 300 at the RISC-V Day. To give an illustration of how quickly things are developing: 18 months ago, almost all the people I met in China had never even heard of RISC-V.

Attendees at the RISC-V Day flew in from all over China, and were not just from the semiconductor industry: they included venture capitalists, journalists and internet companies (Alibaba and Tencent were there). The fabless semiconductor industry was well represented, of course. C-SKY sponsored the event, with the CEO, Qi Xiaoning making an appearance in a panel discussion. With strong interest from companies such as these, the future looks bright for the RISC-V ecosystem.

Discussions touched upon recent events surrounding ZTE. Chinese semiconductor companies mostly seem to view this as an opportunity, rather than a threat: with the  possibility of government funding and preferential treatment domestically. RISC-V plays into this because it gives Chinese companies an open ecosystem and, they hope, an opportunity to break the existing hegemony in the processor industry. Building an ecosystem from the ground up, especially one originating in China, would be near impossible. It would take decades of work and investment, with no guarantee of success – the travails of Chinese technology companies working outside China are well known, with success limited by government and commercial distrust. Imagine how difficult it would be to develop a Chinese proprietary processor architecture. But RISC-V changes all that.

Other domestic fabless companies at the RISC-V Day included: Unigroup, HiSilicon, Tangram Tek, ASTRI, MiCourier and Ingenic, among others. The university and government presence was also noticeable, plus students from Fudan, Beijing and Tianjin. Students from Beijing presented interesting work on RISC-V; the China Academy of Sciences ICT was present as well, and are due to tape out a RISC-V chip later this year.

Most people looking at RISC-V will have heard of SiFive, Andes, Syntacore and Codasip: these established names were joined in Shanghai by an interesting new player, Nucleisys from Wuhan. Bob Hu from Nucleisys gave a good account of their Hummingbird core, and was also keen to promote his Chinese language book on developing RISC-V cores; a big step for the Chinese community which previously had no Chinese language material to learn from. Unsurprisingly, Nucleisys are targeting Cortex-M users; surprisingly, they are promising “lower royalties than Arm“. So they seem to be trying a different business model to other RISC-V core companies.

Nucleisys is also working with Chinese FPGA companies like PerfXlab, Anlogic and Pango Microsystems (a Unigroup company), to create RISC-V FPGA MCU boards. The goal is to get these boards into Chinese universities to help create a new generation of RISC-V CPU experts.

Where is China and RISC-V now?

There are still a lot of misunderstandings as to what RISC-V is (it’s not a free core), and the same can be said for most regions, but every major fabless company in China is now looking at RISC-V, in some way. In some cases this may be initial interest or research; but others are already at, or close to, tape-out of RISC-V based SoCs. Very active RISC-V WeChat discussion groups here have close to 1500 members. The involvement and activity is much more than Europe, where RISC-V developments seem almost non-existent, but closer to the excitement and acceptance we see in the US.

This year, I expect to see further government, university and research institute involvement in RISC-V, and at least one more Chinese RISC-V core company. The semiconductor industry remains very strategic for the Chinese Government: it’s a key area where they face a huge trade deficit, and although Chinese companies sell great electronic products around the world, the core IP within these devices is almost always imported. And that means a lot of the profits are also going abroad. Over-reliance on foreign IP was highlighted by the ZTE case and RISC-V represents one of the ways in which China can reduce such reliance.

Of course all this becomes a great opportunity and makes for exciting times for UltraSoC!